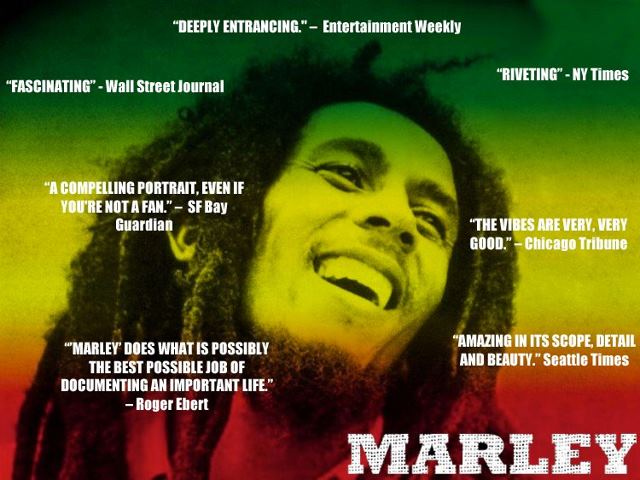 The day was finally here! The highly anticipated Marley documentary was in theaters! While the film can be streamed on Facebook or viewed on demand at home I wanted the complete experience.My 15inch computer screen was not good enough.I needed to see Bob’s face on a 50ft amphitheater screen and hear  Trenchtown Rock in crisp quality surround sound. Only 2 theaters in the city is playing the movie and most of the Friday shows were sold out.

Luckily I got a ticket to a 10PM screening. I debated whether I should see the documentary on the release date or wait a while. My initial thought was that a lot kids who are not true Bob fans will go to the movie and get high just so they can “honor Bob on 4/20.” I simply couldn’t have folks and their  ‘naive disrespect‘  ruining this for me. Thankfully nothing of the sort happened.

Director Kevin McDonald is brilliant. Marley captured Bob’s true essence, an honest depiction of his character from good to ‘bad.’ The 144 minute documentary chronicles Marley’s life from his humble beginnings in St.Ann’s to his journey to becoming the third world’s first superstar. The documentary features new in-depth interviews with his mother, children, his women, and close friends in addition to never before seen videos and pictures of Bob on and off the stage.

All the real Bob fans out there who love Bob, you are going to love him even more after this movie. Matter of fact, you are going to feel like you knew him. McDonald’s documentary gives fans a true and meaningful connection to a man we only know  through song. As crazy as it sounds, I feel closer to the guy. At one point of the film I even got a little emotional (I definitely wasn’t that only person because I heard sniffles in the theater). I’ll spare you the details of the documentary, I don’t want to ruin your experience by spilling all the tea but I do want to share a few interesting facts about Bob that  EVEN I did not know.

Inspiration/Meaning  for his his songs

Duppy Conqueror- Before they performed for an audience their manager sent them to the cemetery at 2am  to perform every night. His reasoning was that if they can can sing for duppys (ghosts)and not get frightened then they wouldn’t have stage fright when they perform for the very  first time.

Small Axe- was directed to the Wailers’  former management who had  newly formed independent label Big Tree records. Think of it as the Ether of their time.  So if you are the  Big Tree we are the small axe ready to chop you down (REAL SHARP)

Jah is Mighty- Bob penned the song after he went to his father’s company to ask for money.  They rejected him, he then returned to Kingston and wrote this tune (one of my top 10 Bob songs). The most poignant commentary regarding this story is from Bob’s half -sister (you’ll see what I’m talking about when you watch that doc.)

Bob was a very shy. He was so shy that he had his friend deliver a  letter he wrote to Rita asking her if she wanted to go out with him. He was also a very competitive in everything, even with his kids (Usually when you play with your kids you make them win-not Bob. Ziggy tells a funny a story where they were racing on the beach and Bob’s running full speed not easing up on him and Cedalla). Most importantly Bob was selfless. His life was dedicated to people.

He was ‘the skipper’ of Hope Road. Bob ran the house like a tight ship. Women entering the house were not allowed to wear pants or ‘war paint’ (make-up). His girlfriend, Cindy Breaksphere has a funny story about this.

Bob’s house on Hope Road was like an open door for the Rasta community. He dedicated his life to people. Hundreds of people would like up asking for help and Bob made sure every one was taken care of. The money that he gave out to these people was substantial enough to make a huge difference in their lives.

Bob was a G

-After learning about a manager’s deception overcharging an African head of state,  Bob and his team dangled the manager over the balcony for hours until he fessed up to his lies. Rude boy ting dat!

-He was the only one still performing on stage after the police released can of tear gas during his Zimbabwe concert!

He was really concerned that he was not reaching the Af-Am audience and wanted to connect with them so much that he decided to open for Sly and the Family Stone when he should have been the headlining act! Enough said.

After learning about his cancer diagnosis he rehearsed Hurting Inside with the band  for three hours!

I always thought Bob denied treatment. In actuality after the toe incident he had been touring so much that he never went for his check up appointment. Had the man got a check up after the incident he may be very well still be alive today! Doctors told him he had three weeks to live but he survived for 8 more months after seeking treatment from a holistic doctor in Europe.

Oh, did I mention that he was a VERY, very handsome youth.

He had no ambition. Bob told an interviewer that he really has no ambition, his only real ambiton in life is to see people unite as one.Incredible.

-He moved to the States and lived with his mom in Wilimington, Delaware.  There he spent a year working at the Chrysler factory.

-The crowd called for 3 encores at his final concert in Pittsburgh.

If Dr.Dre brought 2pac back at Coachella, I’m wondering if the Marley family would consider doing a Bob hologram? I’d drop some serious stacks to see him perform again, even if it’s only a hologram.

Check out this clip from the film: