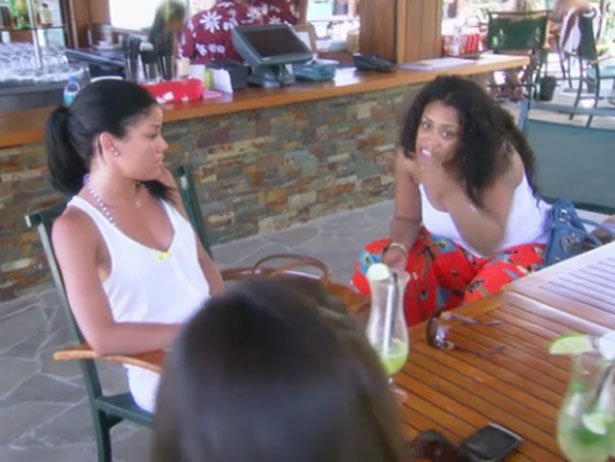 Basketball Flies  (word to KidFury) notorious for its hoodrat foolery has come under heavy criticism this season.It seems viewers has had enough of the ratchet antics of these forty-something year old women. Initially I was not going to write about the show because 1) I didn’t want to add to the existing blogosphere chatter around these women 2)Their squabbles does not merit exposure on this site. However, I decided to write this entry after episode 12  left me seething. I couldn’t believe what I witnessed – adult bullying to the extreme.

Nothing gets me more enraged than seeing someone being taken advantage of. (I mean the trailer for the documentary Bully affected my whole day.It broke my heart to see these kids so defenseless. No Lie.)I can spend the rest of the post berating Ms.Liquid Courage Tami Roman but I’ll refrain. Roman has always been a fan favorite of the show, regarded as the “bxtch that keeps it real.” In this episode, everyone saw her true colors  real psychotic behavior. Yes, Roman had ‘traumatic life experiences’  but she constantly plays up her ‘anger management  issues’, using  it as a band-aid for her bad behavior. She is delusional, no doubt about it. Clinically there are  several types of adult bullies: narcissistic, impulsive, physical, verbal, and secondary¹.  Roman may quite possible fall into all four categories. The other women are not exempt from being called bullies either! In this instance they acted as secondary bullies. They didn’t reprimand her behavior instead they indulged like middle school mean girls, looking to appease their  queen B. It was evident that they were scared to feel the wrath of Tami. They acted more like followers rather than friends. A true friend is not scared to call you out on your bullshit.

Getting down to the crux of the matter, the  most painful  thing to watch in this episode is Kesha’s response. Initially she decided to be the bigger person and remove herself from the situation, but as Roman’s attacks persisted she completely shut down. There was no fight in her.It’s hard to see someone not defending themselves. Kesha didn’t want to stoop to Tami’s level by engaging in conversation. I get that. But then when Tami stole her purse Kesha completely checked out mentally. She was defenseless, it was like watching a lion drag a gazelle through the Serengeti plains. I’m a little too old school to adhere to the ‘be the bigger person’ bit if I was placed in a situation like that. I’m more Hammurabi’s  code old school an eye for an eye. It is my firm belief that if someone takes advantage of you with intent to harm retribution is due whether it is physical or in any other form.Though I avoid confrontation, if it comes to my front door,believe that the situation will be handled accordingly.

Dealing with a bully whether you’re the age of 5 or 25 is not easy. However it is soo important that you stand your ground. Just fight, fight back. There are some of you that may counter with Ghandi’s “an eye for an eye makes the whole world blind” to that I say we will all need guide dogs.Cruel advantageous behavior will not get over on me easily.

I have seen too many school shootings, and suicides related to bullying played out in news headlines. I’m not a violent person, violence does not necessarily solve problems but in situations of bullying I tell my younger cousins if someone hits you, crack their skull.If you see someone being treated unfairly or taken advantage of speak up!  This is something I have zero tolerance policy for. By not fighting you are inadvertently rewarding and supporting antagonistic behavior. It is so important that you assert yourself.While I known that reality TV is scripted, Roman has to accept responsibility for her actions. The end result of possibly ‘playing it up’ for the cameras was quite sad, and ugly.

There is a change.org petition calling for advertisers to boycott the show and for VH1 to cancel the Ev& Chad spin-off show. The petition has amassed just under 26,000 signatures. Summer’s Eve has since ended their sponsorship with the series.