Oh Oh Oh come fill my glass up a little more…you know we’re getting hotter and hotter sexy and hotter let’s shut it down! #POUNDTHEALARM

I absolutely LOVE this video. Maybe I’m biased, maybe director Benny Boom just did a great job.Either way if you’re not familiar with Trini culture you’ll find yourself checking Carnival packages on Expedia and if you are familiar you probably already booked your flight and is watching this video saying YESSSS!

While the lot of us were busy barbecue hopping on July 4th, Onika and Benny Boom were hard at work in Trinidad cooking up this fine piece of art. It was Independence Day in the States but over in Trinidad it was unofficially Nicki Day. Minaj arrived to much fanfare shutting Port of Spain down and saw strong support from her country. Some of  soca’s biggest stars like Machel Montano, Bunji Garlin and Fay-Ann Lyons performed on set and showed the Queen love. Who would’ve thought you’d see Garlin and Machel on the same stage at the same damn time! #Unityyy

A steel pan version of the song opens the video as director Benny Boom pans over various breathtaking shots of  the island  from Port-of-Spain, Pigeon Point, the Northern Range and Maracas Bay. The scenes complements the building techno beat and you just know that some epic is about to go down! I loved the display of Trini Carnival culture from traditional characters such as the Moko Jumbies (stilt walkers), Jab Jabs (blue devils) Dame Lorrraine, Pierrot Grenades(2:50 mark), and Fancy Indians. Old mas at it’s finest.

Though I can’t get enough of this video Nicki played  it too safe. The shorts are cool and all but  I wanted to see her in the full Tribe costume! She has the body for it! But can I just say that I find the American media description of her mas costume to be extremely hilarious. I’ve seen everything from feather leg warmers, feather shin ornaments, to Illuminati wear.Shade.

The video is getting a slew of positive reviews in the Trinidadian media circuit for the way in which portrays Carnival culture. It was even shown on Trinidad’s TV 6 news!  Now that’s MAYJAH!

Nicki I want to see a collaboration with Machel, Kes, Bunji, or Lil Rick.Either one I’ll be fine with. Let’s make that happen on the next album or mixtape. Ok? Cool!

Who’s ready for Carnival Tuesday? I AM

Nicki with the ‘stank’ wining face. Masqueraders know this face! 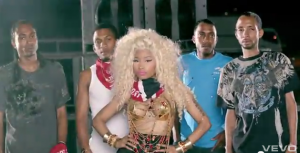 Nicki and her fam. St.James posse

If you’re interested in playing mas and want to learn more about vacation packages. Send an email to andreaverdel.llc@gmail.com. I have an amazing travel connect. Don’t say I didn’t tell ya!