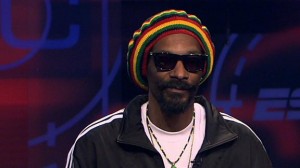 The Dogg is now the Lion. Rap icon Snoop Dogg announced in a press conference on Monday that he is changing his name to Snoop Lion. The rapper credits this change to a spiritual and artistic rebirth after being immersed in Rastafarian culture during a trip to Jamaica. This is no gimmick Snoop was officially rechristened by Rastafarian priests. He told  reporters “I feel I have always been a Rastafari. I just didn’t have my third eye open, but it’s wide open right now.”

At the press conference Snoop Lion premiered the lead single “La La La” from the upcoming reggae album aptly titled “Reincarnated.”  Snoop says that songs on this album will now allow him to perform for grandparents and kids, noting that this is something he could not have done before as a rapper.To us this transition may seem left field but for Snoop he knew this change was always coming.He felt like the songs done so far in his career did not allow him to reflect the wisdom he’s gained  from being a 40 year old father of three. He says:

“Rap is not a challenge to me.I had enough of that. It’s not appealing to me no more. I don’t have no challenges. I’m ‘Uncle Snoop’ in rap. When you get to be an uncle, you need to find a new profession so you can start over and be fresh again. I want to be a kid again.I have always wanted to make a song that could really stand for something. I could never make a song called ‘No Guns Allowed’ because I was supposed to be a gangsta.”

The newly reborn Snoop Lion has three projects on the way,a coffee table book, album, and a documentary that will be screened at the Toronto International Film Festival in September. However he stopped short of saying he will not make another rap album.

I don’t think Snoop is going though a mid-life crisis. Anyone that has a strong understanding of  Rastafarian culture can understand it’s appeal. I’m curious to hear what the album will sound like. Diplo is producing so I know the Lion is in good hands. I’m more excited to his documentary that captures his transition. Take a look at the trailer below.

Will you buy the “Reincarnated” album when it drops?