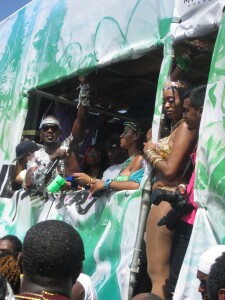 Pick-Up
For some reason everything became real when I saw my costume in the box for the first time. However those 2 secs of gatdamnnnn! came to an abrupt halt when I noticed a rinky dink tiara in the box. Hold up, hold up. That could not possibly be my headpiece! THAT’S THE HEADPIECE?! LIKE REALLY?! GTFOH with that! That’s reallly how I felt and what I wanted to say to woman organizing my materials.The main reason why I chose this section was the elaborate feather headpiece. Prior to making a full deposit I called and asked if the headpiece came with the backline costume.I had to confirm since headpieces of that caliber are not typically included with backline packages. The rep on the phone assured me that I’ll be getting the headpiece with my costume. So imagine my surprise when I see the tiara in the box.(The tiara really wasn’t bad it’s just not what I expected or wanted). I asked to upgrade and without even checking to see if there were any extras available she said no. Fast forward 2 days later and I was able to get my headpiece all thanks to Snowstorm Nemo. A lot of masqueraders were stuck on the Northeast and were not able to pick up their costumes.Cold world. Another wtf moment at pick-up was the sheer looking fabric aka Monday wear. I like Monday wear that’s straightforward and easy.I did not have the time or energy to be creative and try to make this piece of “fabric” work.
Carnival Monday & Tuesday
I didn’t know the true meaning of exhaustion until Carnival Monday.Overzealous I decided to play j’ouvert. (Read: storm j’ouvert bands).The main goal at j’ouvert was to jump up with a few bands, nap for five hours and meet up with IP Monday morning. Well that was overly ambitious because the five hour nap turned out to be an hour nap.To the people who play j’ouvert then meet up with your band immediately after, how do you do it?! I’d feel like a zombie. We made our way to the Hasley Crawford stadium to catch the band’s shuttle. Everyone is patiently waiting in line  in the blazing hot sun and then a group of 15-20 people skipped. Debo movements. Despite the line situation we linked up with the band in good time. They were near the hospital getting ready to cross the stage. At this time the  bar stopped serving drinks and  you can only imagine the drunk fury that came over people when they couldn’t get their refills or much less their first cup of liquor for the morning.  After crossing we headed to our rest stop at the Queen’s Park Oval. Exhaustion started to kick in but luckily the rest stop was close by so I didn’t mind the distance. Well actually it wasn’t near at all but with the drinks and music it seem a lot closer than it actually was.The key is to keep moving because once you stop exhaustion hits you like a pile of bricks. When we arrived at the Oval it was chaos on one of the food lines. Some masqueraders had no behavior! Pushing shoving and skipping to get food was so unnecessary. I made it out of the line just in time before a fight broke out. Security swooped in within seconds to break it up.Whoever hired the security team did an excellent job. They played  absolutely no games. Extracting stormers out the band which such ease. Salute. 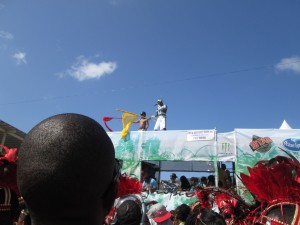 On Carnival Tuesday our group walked from Woodbrook to Charlotte St because other IP masqueraders told us they’ve been waiting for the shuttle for over an hour. When we finally met the band around 12ish sandwiches and drinks were in order since none of us ate breakfast. We were parked on Charlotte St? (don’t really remember which street tbh)  waiting to cross the stage for about three hours. The final 2 hours was hell. The bar was closed, my buzz was gone, and the sun was killing me. That sun is no joke. Even with sunblock my skin continued peeling a week after. However as soon as my section was nearing the stage a surge of energy came on. For many masqueraders crossing the stage is the main highlight of their Carnival Tuesday experience. The whole world is watching. Literally. Carnival Tuesday is live streamed in over 85 countries. Even though IP is considered to be a “party band” we were still being judged on presentation so this is the time to show them what you working with. We crossed the stage to Machel’s Float with  Swappi on the truck hyping up everyone.I was a bit disappointed we weren’t crossing with Machel. He crossed with IP in 2012 so I was expecting the same thing. BMobile, one of  IP’s biggest sponsors recently suspended their relationship with him due to legal issues. It was definitely wishful thinking on my part that he would’ve been there. 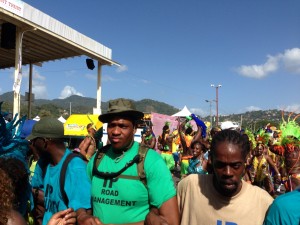 After crossing I felt like my limbs were about to give out on me so I sat on the truck until we were back at the rest stop. This time around there were no fights from what I saw. The riddim section on both days was a nice addition to venue.  The vibes during the first half of the day was crazy but was amplified when the sun goes down tenfold. In no hurry to go back to the Stadium we chipped with the last truck in the band.We had a mini last lap at the  stadium and was granted an extension by the police to continue partying. All I can say is TMFV! (too much effin vibes). I really didn’t want the Carnival experience to come to an end. I had too much energy to go home.This was my first time playing mas in Trinidad  and I must say that Island People Mas delivered and them some. Despite hiccups with upgrading my costume, the quality of  service on the road met my expectations. I saw other bands on the road, and I can say no other band had vibes like we did. No lie. No mamaguy.

A few recommendations to increase the level of service and quality are to implement a “touch up and go” station at the rest stop and  to over communicate with masqueraders should there be any changes in the route. For instance Tribe had Tresemme’s Touch Up and Go station at their rest stop where masqueraders can touch up their hair and makeup and even get a massage! Swankyness! Other bands should definitely follow suit. 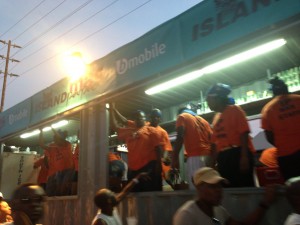 Right now I have Carnival Tabanca. For those of you unfamiliar with the term Tabanca is the extreme sadness or depression that follows after a breakup. So in this context  Carnival Tabanaca is the longing for Carnival culture. It’s the Trini version of saudade, except that Carnival comes back.I now see why they call this the greatest show on earth.Until 2014 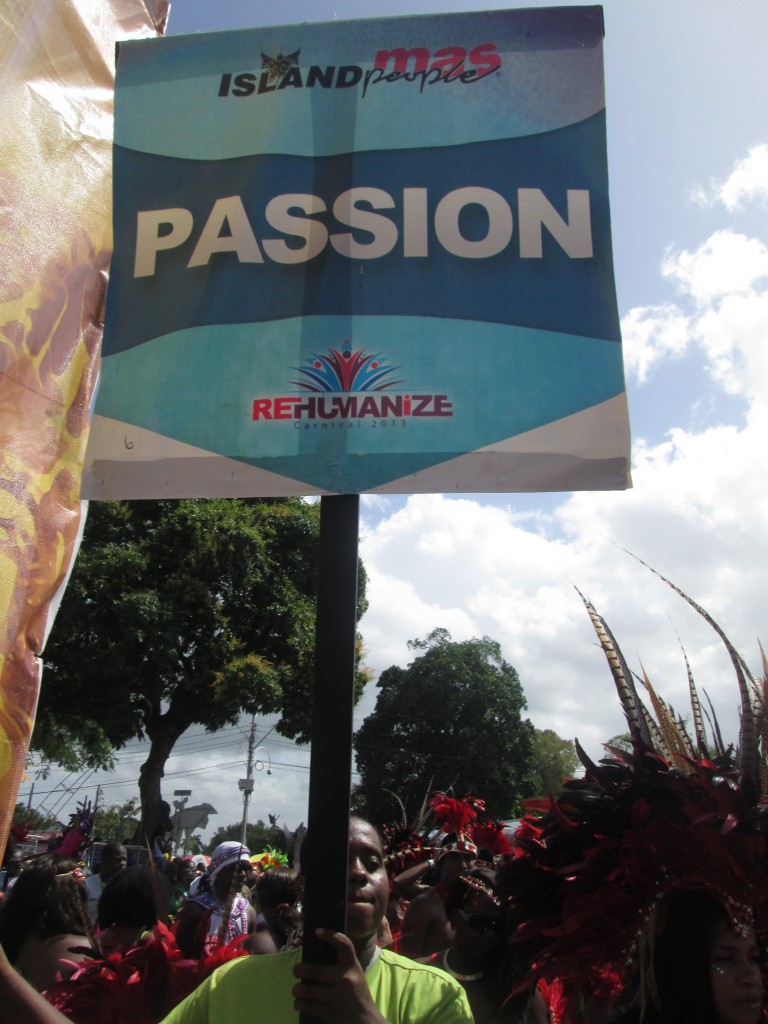 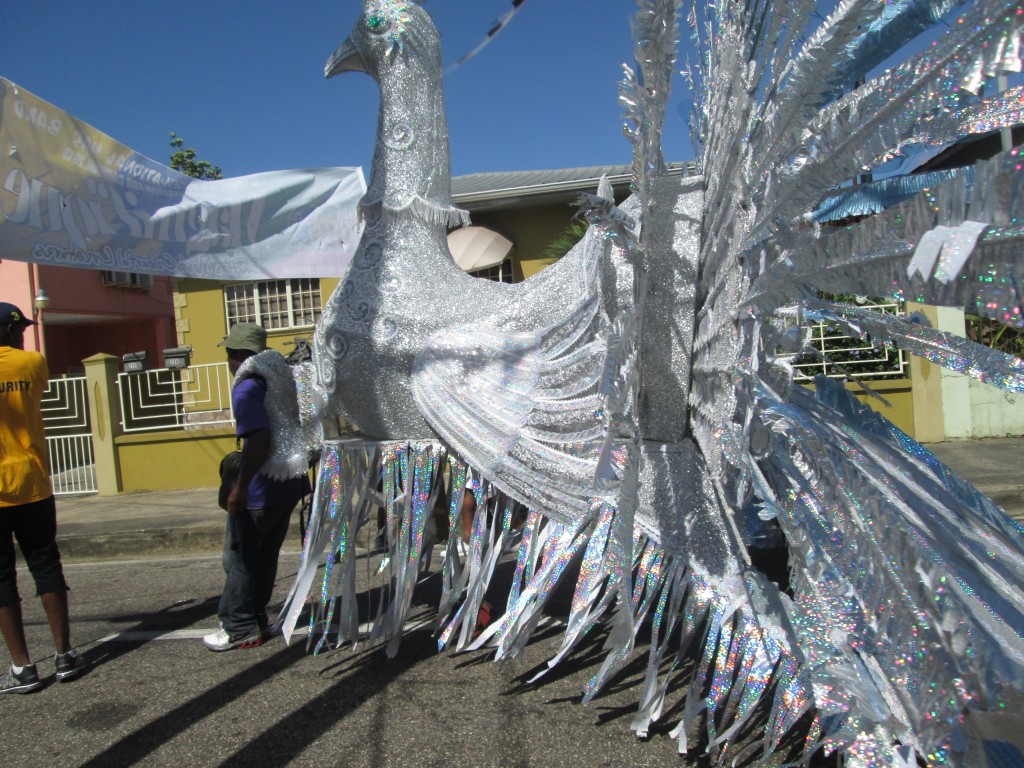 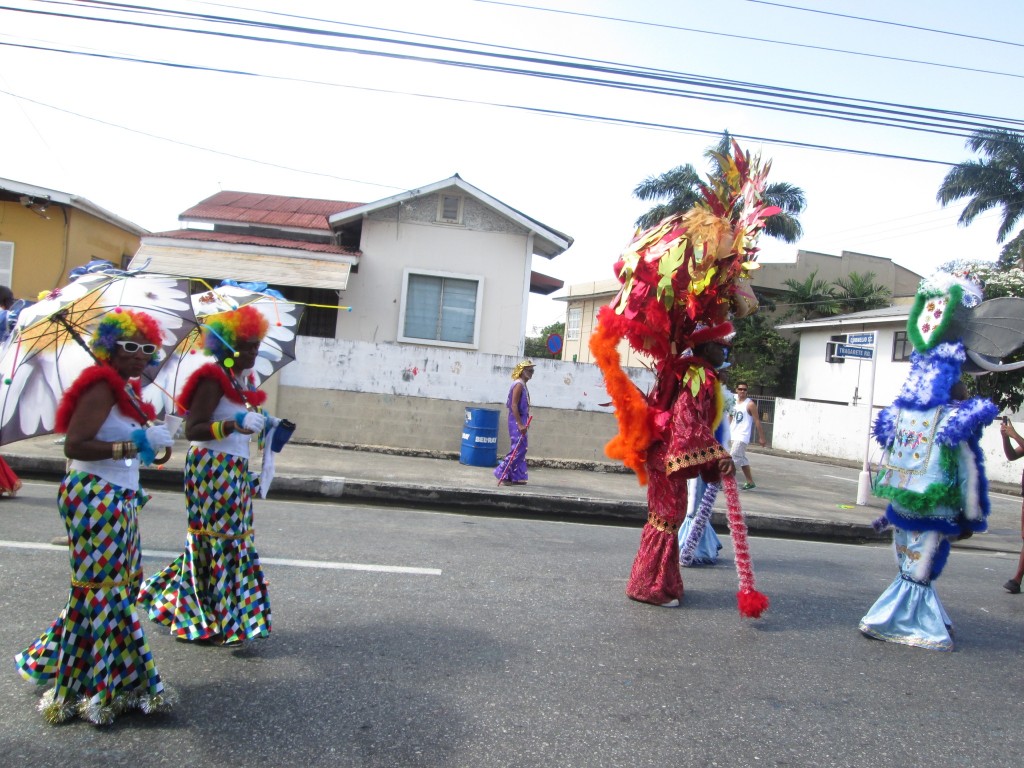 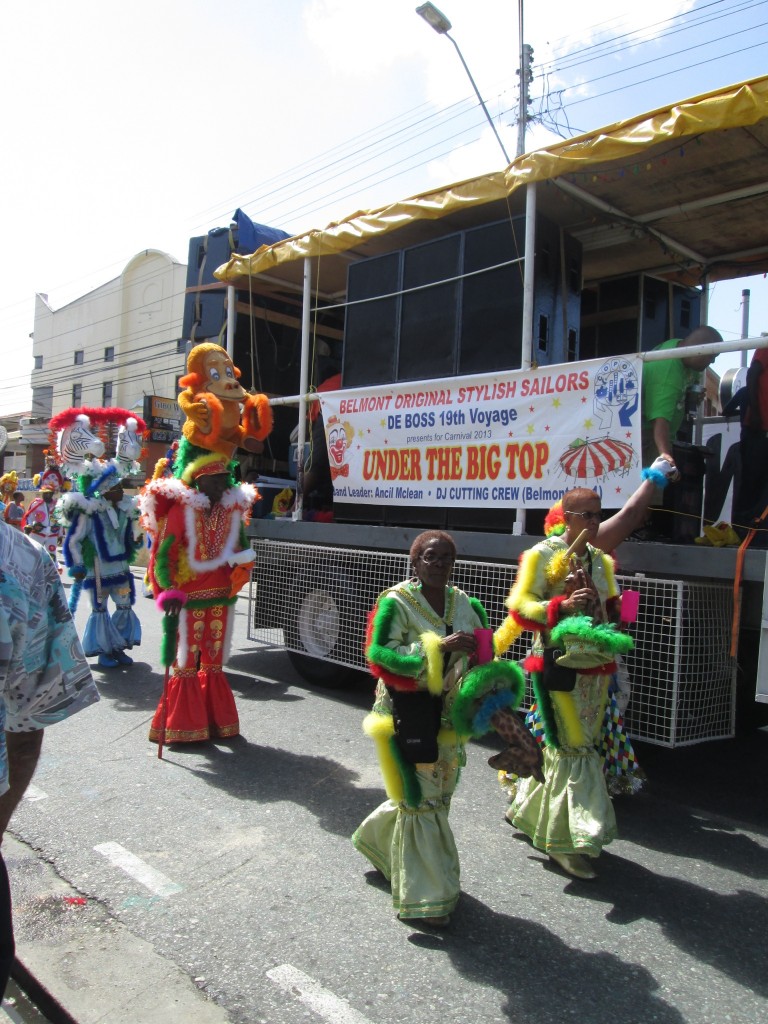 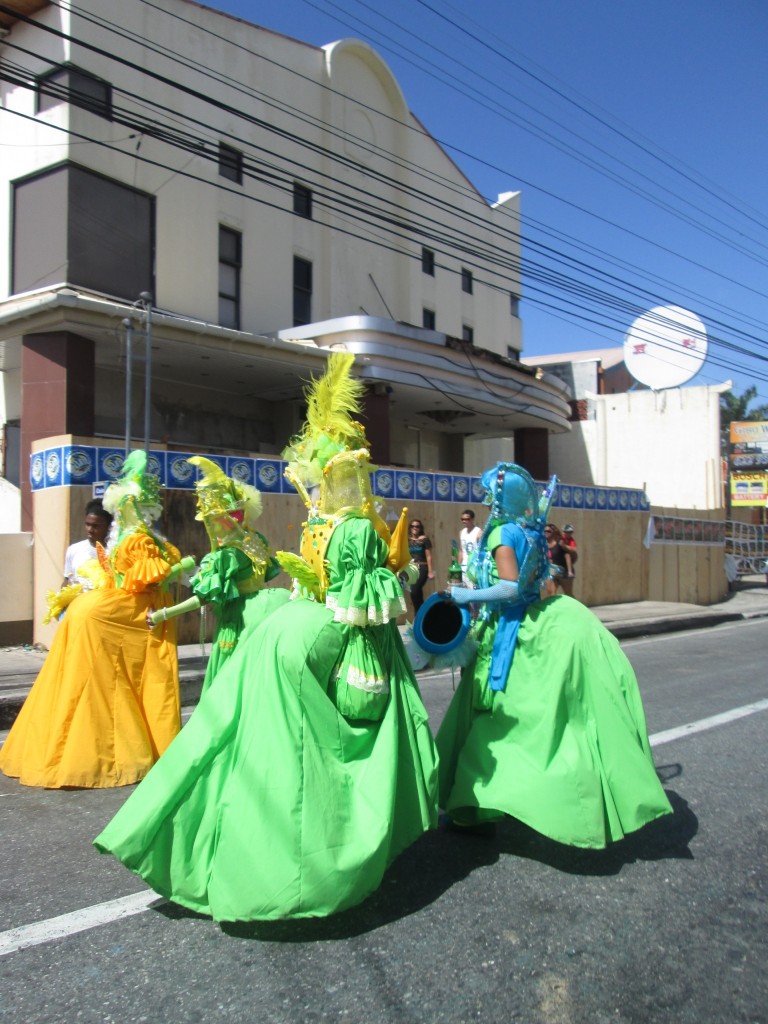 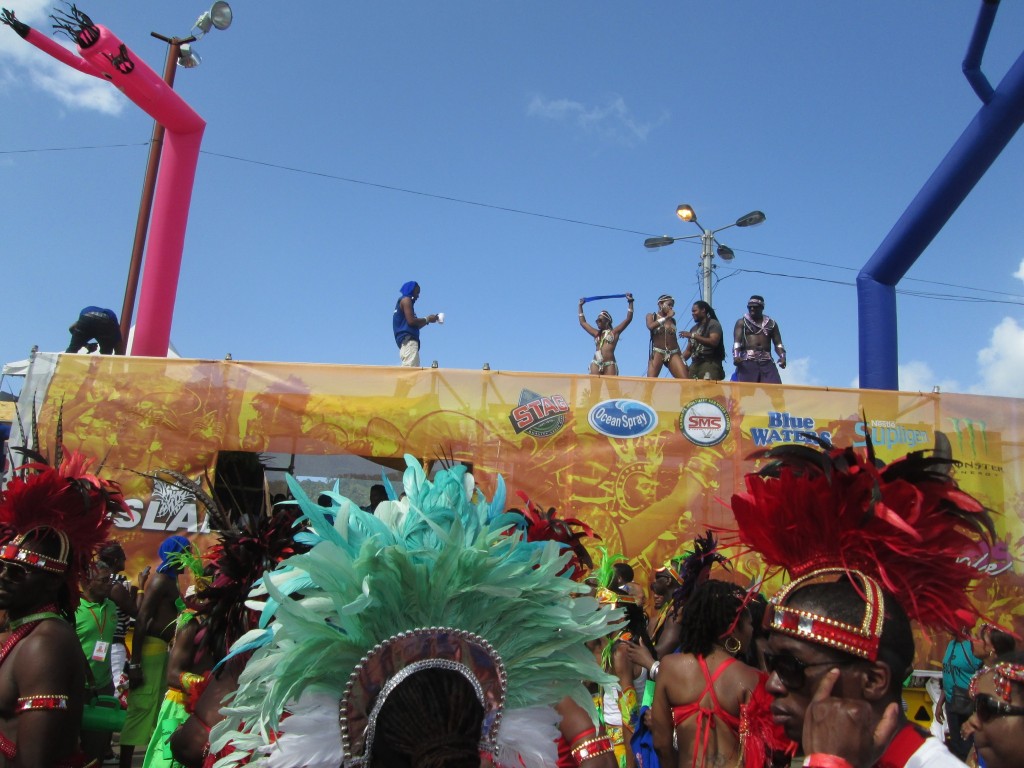 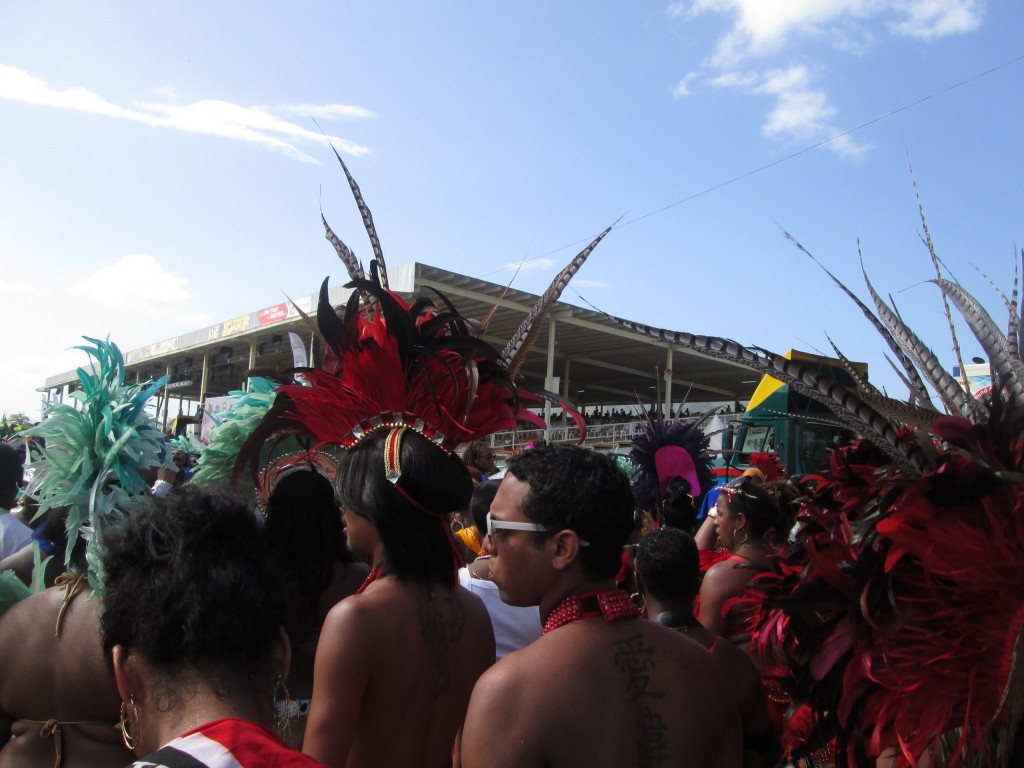 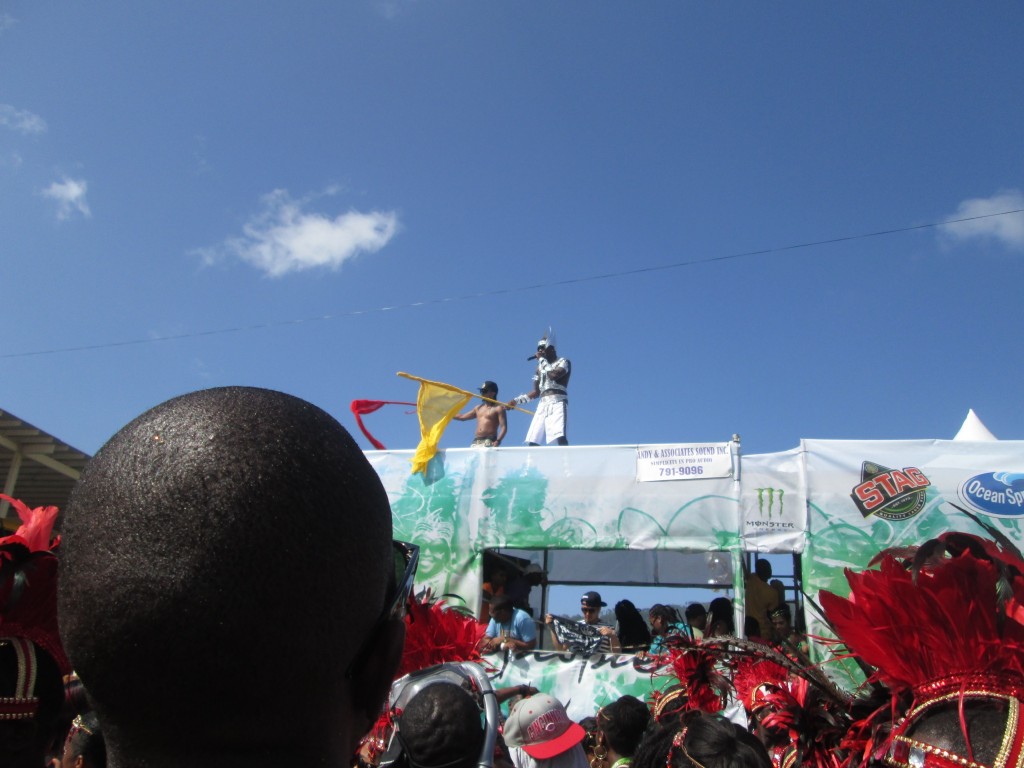 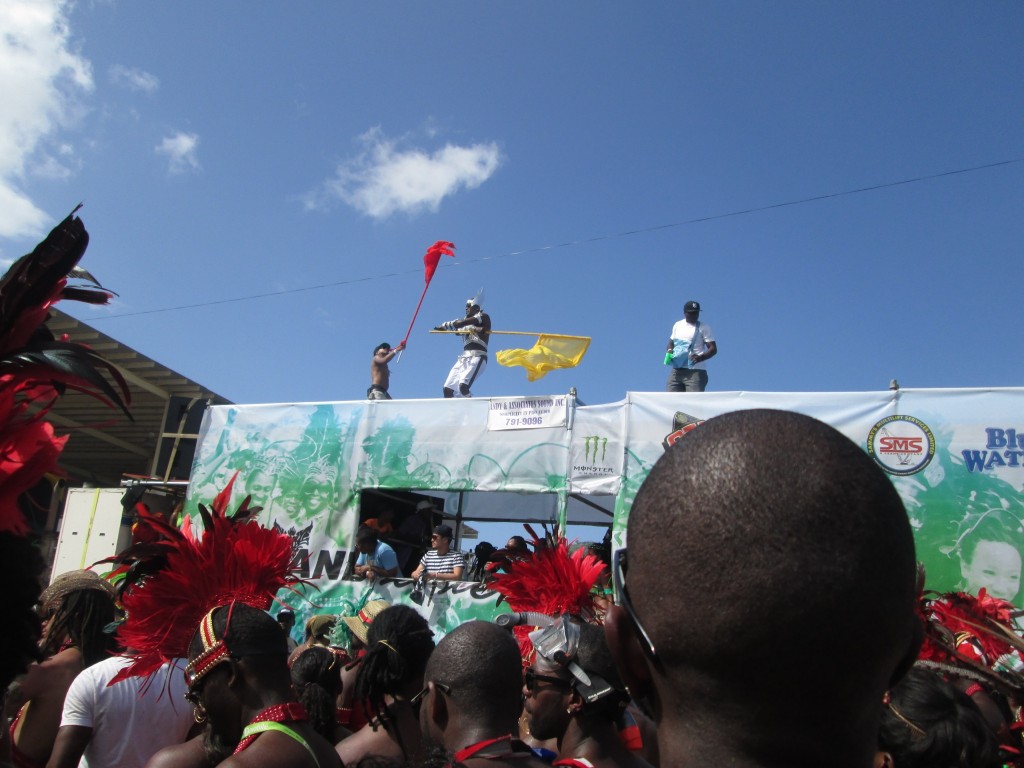 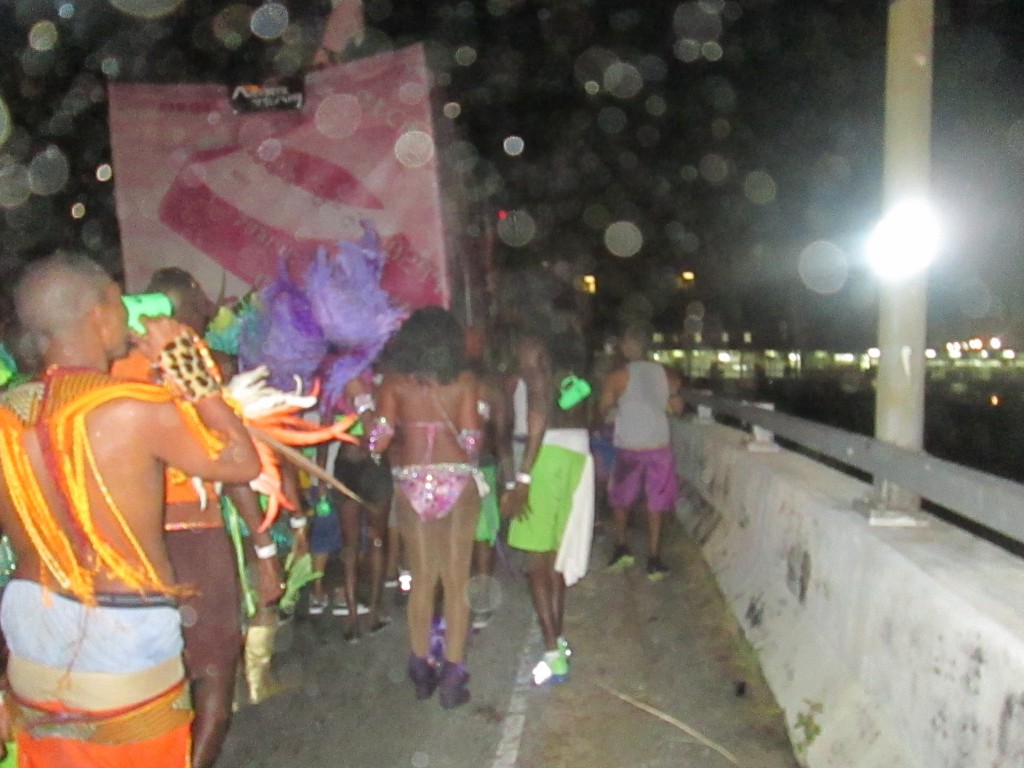 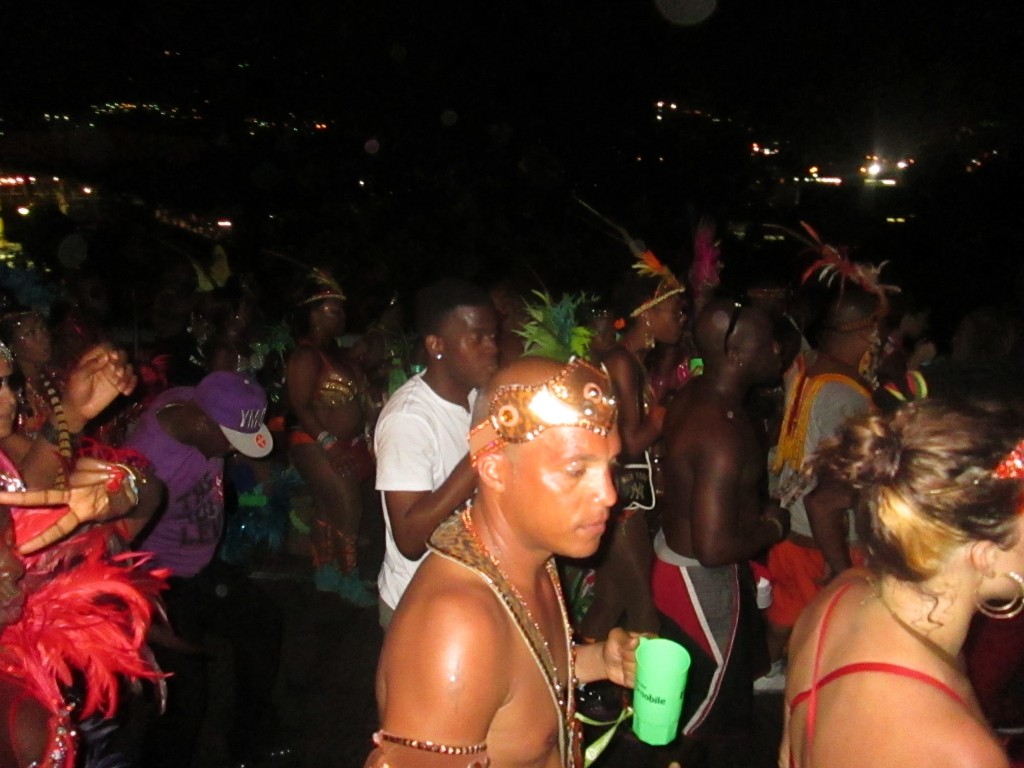 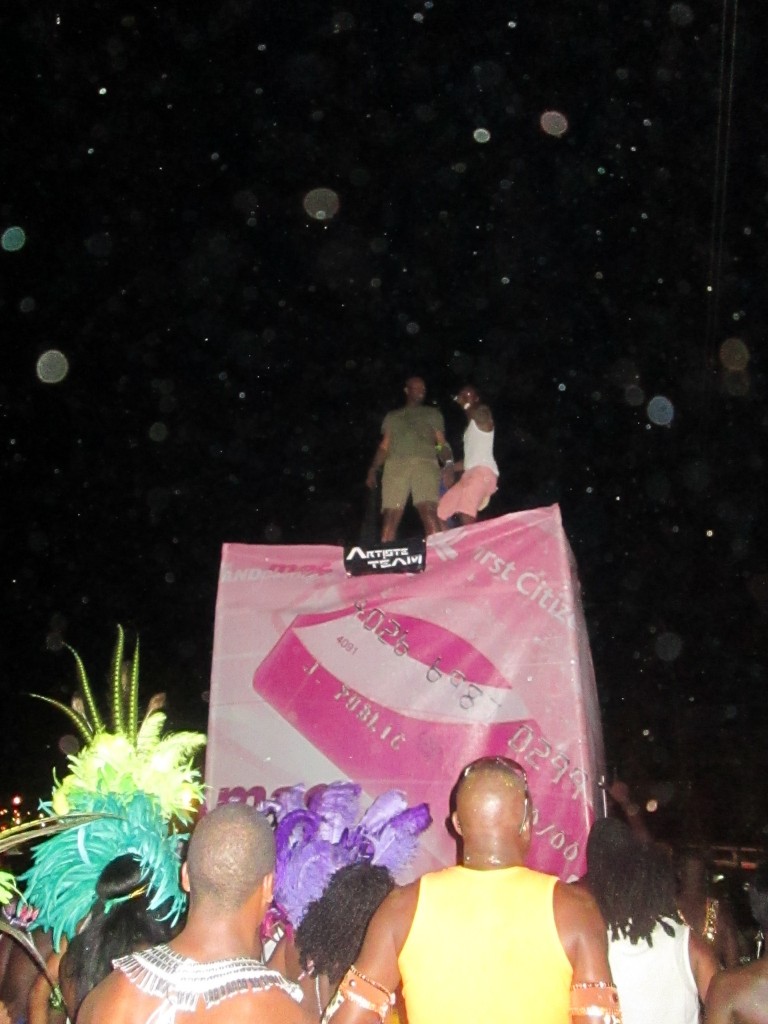 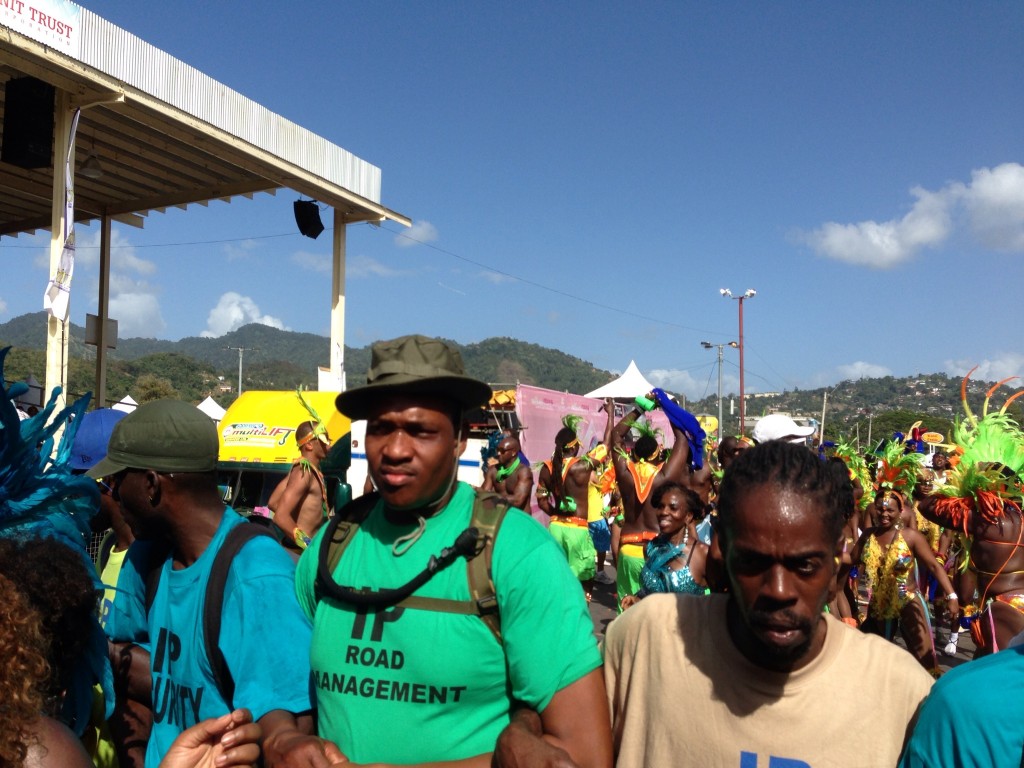 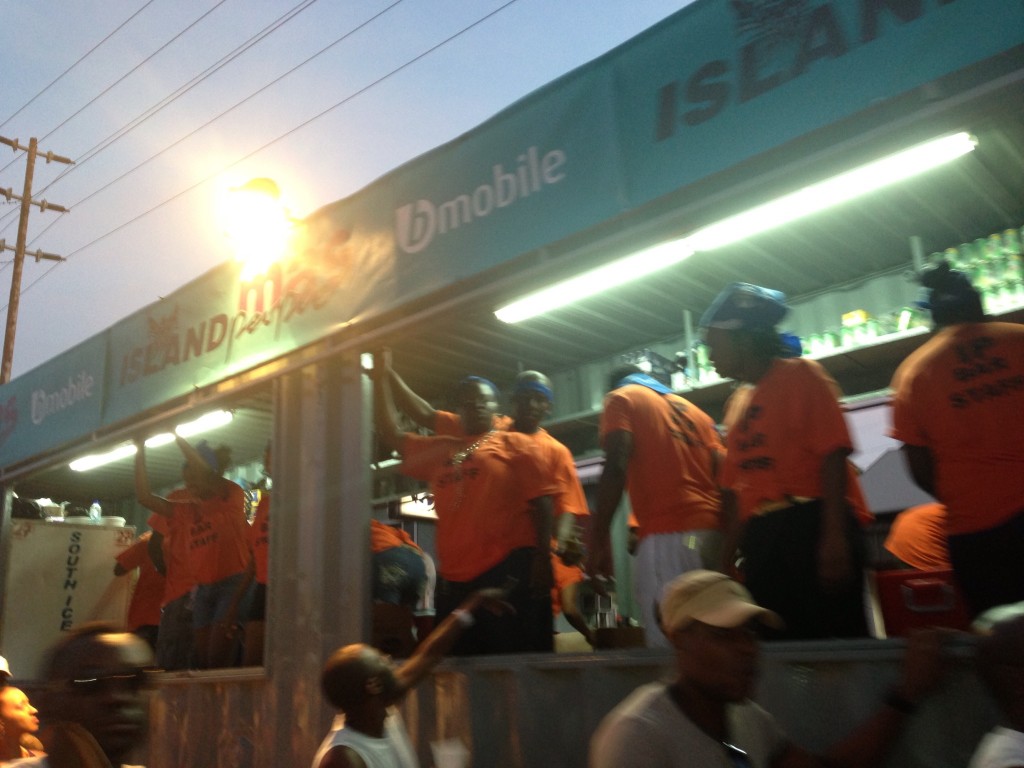