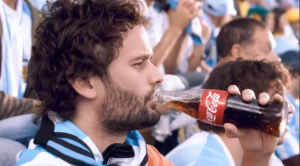 The World Cup is coming to an end in a few days and I won’t know what to do with myself when it’s over. Sure the Premiership starts soon but nothing can really replace that level of  excitement. I’ve been watching the World Cup since 1998 and even though I did not shed a tear by far this has been the most exciting tournament. It  was filled with  major upsets and  short-lived stories of triumph for some teams.  As usual advertising production grew larger, whether it was  through the usage of players or  regular people, a lot hit the nail on the head by telling exciting and bold stories, truly captured the essence of the game.

Before the competition kicked off I briefly created a list of campaigns that caught my eye here. (Surprisingly I did not see any of Coca-Cola spots during ESPN’s game coverage.) In no particular order here are some of the best ads I’ve seen during this glorious month.

Nobel Peace Laureate’s aren’t above the fray. They get petty, cocky and go hard for their team just like us.

4) The Game Before The Game- Beat by Dre

I’ll be remised if I don’t mention ESPN’s spots. My God, the drama, the passion everything that is football. Shout out to the producers who created these spots because you feel it

Ahhh man and Coca-Cola does it yet again. When you’re able to connect with an ad and not understand the language you’ve got a winner.  The juxtaposition of life mile stones and the Argentina’s  national team play is just…..well just watch