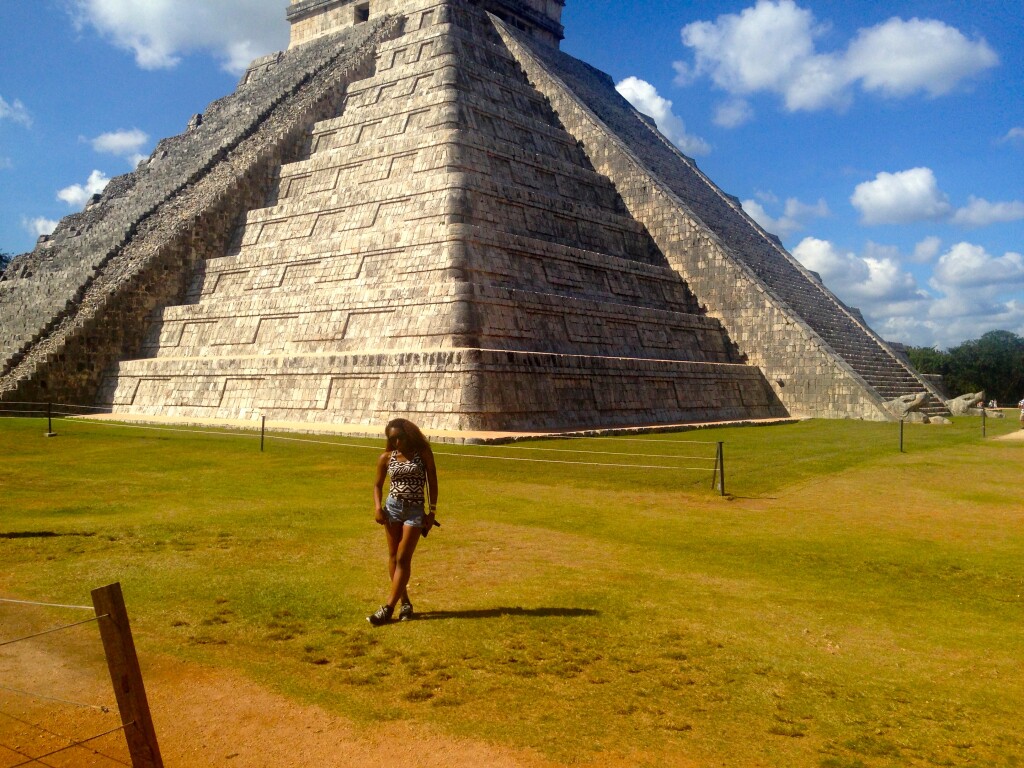 This  past January I was determined to escape the Arctic temperatures even if it meant using my limited vacay days for quick getaway. People with 10 vacays know the PTO struggle. It was also the BFF’s birthday, which further prompted my desire the get out of dodge.  I typically don’t like spending my birthday at home, so I usually push my close friends to do an out of state/ international getaway .  With only 4 short days to play,  our flight needed to be 3-5 hours away which limited our destination  to the Caribbean, Central America or Mexico. We decided on Mexico to check off one of the World’s  Wonders on our bucketlist.

As much as we wanted to stay in LosCabos and  Riviera Maya we chose Cancun because of the close  proximity to Chichen Itza and nightlife. When you only have (4)vacay days to spare you have to maximize the time as much as possible. Losing a day to travel from Riviera Maya to Chichen was not an option as opposed to a 6 hour private archeological tour from Cancun.
Here are some of my highlights:
Ruins, Ruins and Some More Ruins
Whether it is Chichen Itza or Tulum visiting  the ruins is a must in Mexico. I strongly recommend an early morning tour if you’re going to Chichen. Sure you have  to wake up at 5AM and it’s your vacay but trust me it’s worth it.Early tours guarantee that you’ll avoid long lines, and random people in your pics when you’re trying to find the right angles to stunt for the Gram. As we were exiting the site around 12PM it was pure chaos.  If you’re staying in the Hotel Zone,El Rey Ruins
is a lesser known is a site that you should check out as well. Here, they’ll allow you to climb the ruins, and pet the iguanas (if you have the courage to touch them).
Just Touring
I’ve yet to take a trip where I fully took advantage of the resort amenities. Most of my days I spend touring and exploring local areas. This trip was no different, probably spent one day on the resort fully taking advantage of the offered  amenities. Sidebar: This hotel gets zero points for not offering snorkeling/ diving on site.   Now the food, I made sure that I was back on the resort at a decent time to make dinner reservations.The bulk of my days were spent ziplining, ATving (where my life flashed before my eyes) through the jungle, swimming in remote cenotes (while my sunglasses were stolen), and exploring local nearby towns to get a taste of life away from the Hotel Zone.
The Curse Of Montezuma?
The last night  we decided to check out the nightlife downtown. We bypassed popular tourist attraction CoCo Bongo and bought V.I.P passes at Palazzo nightclub. Not my choice but Guest Services in the lobby arranged the night out for us. They set us up with a table and unlimited drinks. The entire night our waiter attempted to  peer pressured  me to chug drinks, and take awful “speciality shots.” I knew better than to take advantage of the open bar, flying back to NY hung over was not option for me. I flew hungover once and I will NEVERRR do it again, definitely was not trying to have a repeat of Miami Carnival.   I tried to be a good sport about it but after a while it became annoying.  All in all it was good night. Hospitality. Check. Ambiance. Check. We left the club around 3 and took a cab back to the hotel. On the way back to our hotel room we stopped at one of the late night spots  in the lobby and  picked up some burgers. BIG MISTAKE. Between the hours of 4AM – 7AM was pure hell.  I’m not sure what caused our situation, the drinks or the late night food but we were soo close to canceling our return flights and our 9AM spa appointment. The pain was unbearable. Literally felt like I was going to die in Cancun. Fortunately  by the Grace of the travel gods we were able to make both our spa appointment and flight.

Sooo in the end  was it #worththetrip? Hell YEA!
The Hotel…#worthestay? NO. Service was lack luster. I’ve stayed at other all inclusive hotels for less that had better food, and five star quality level of service.
Would I go back to Cancun? Probably not. I’d like to see other areas like Los Cabos, and Playa del Carmen before I head back to Cancun.
CancunCenotesChichen ItzaCultureMexico